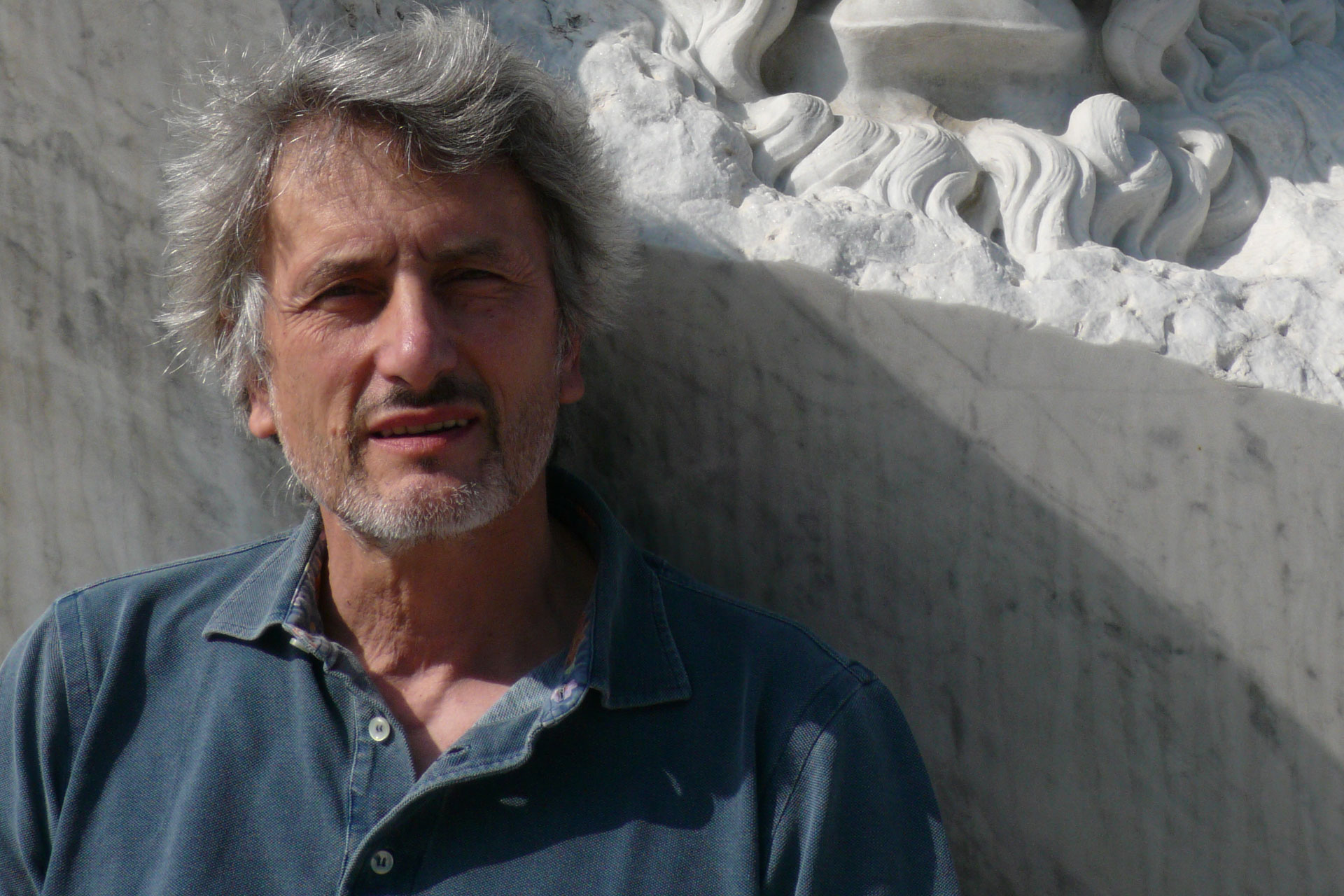 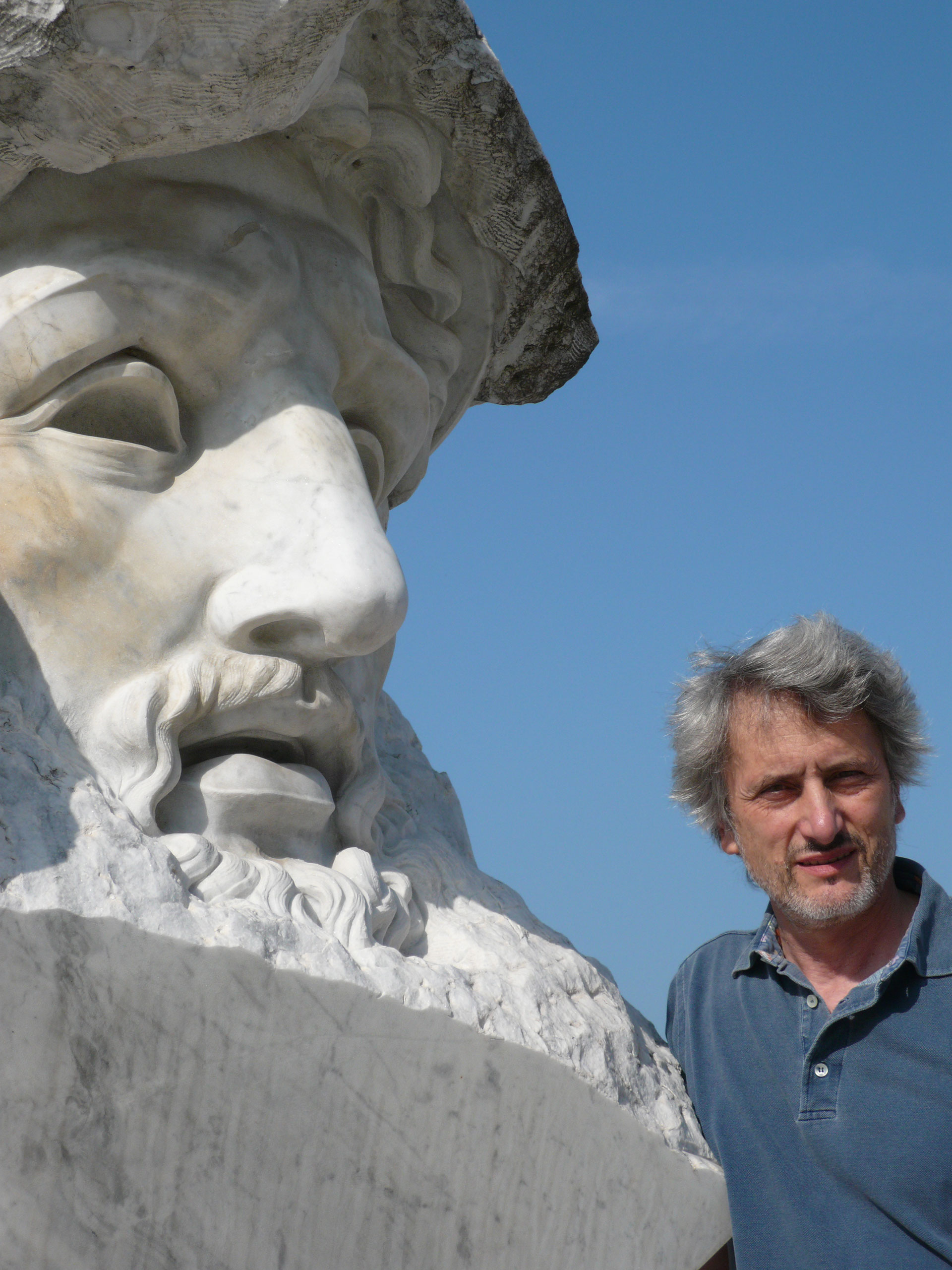 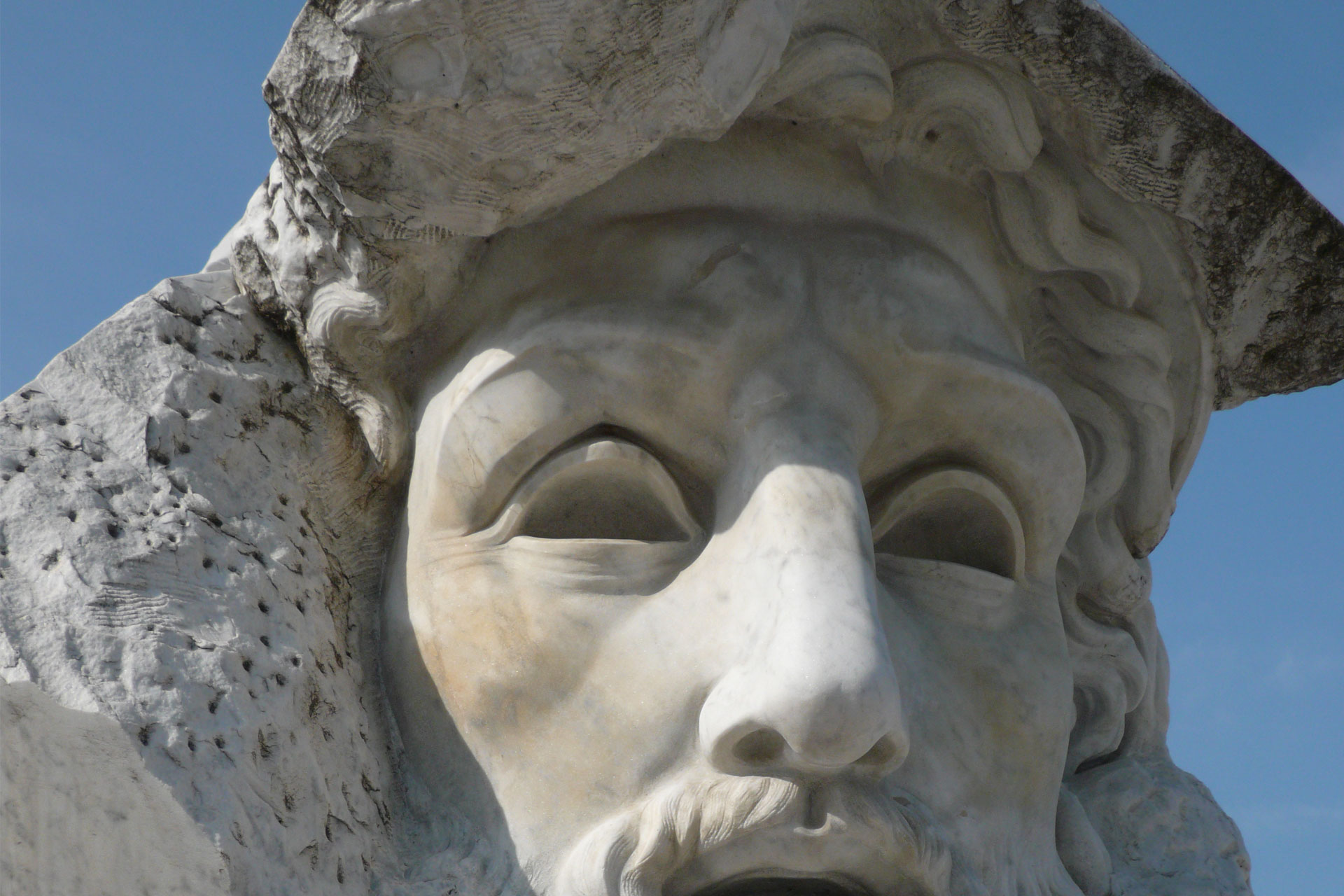 Paolo Borghi was born in Como in 1942, by the father's native and mother of mantua. Her artistic experiences are tied to his father's workshop, being the son of a renowned silversmith, goldsmith and silversmith very well known in the church for the realization of the true masterpieces of the goldsmith's art. It is thanks to the expertise paternal learn all the techniques of processing of metals, and in particular the art of working gold and silver.

In the early years following with profit the courses of painting, sculpture and architecture at the Academy of Brera and the Castello Sforzesco in Milan. Starting from the Sixties, decides to devote himself entirely to sculpture, by purchasing a particular attitude toward the use of bronze, and in the creation of works of great size. In this time he is engaged in important public works, such as the Christ the King, a monumental bronze sculpture for the cathedral of Esmeraldas in Ecuador, and the bronze doors for the Church of S. S. Peter and Paul in Rovellasca (Como).

Holding the first solo exhibition in 1972 at the Galleria Cadario of Milan.

Emerges in his research, the interest for drawing and sculpture.

In the course of the Eighties, he rediscovers his interest in the classical myth, which is evident in the prevailing use of the Carrara marble.

In 1984 he produced the copper ports) for the Basilica of the holy Apostles St. Peter and Paul in Milan. The following important personal exhibitions set up in prestigious galleries in italy, including the Galleria del Naviglio in Milan and the Galleria Apollodorus in Rome and intensifies its presence in the large exhibitions of contemporary art in Italy and abroad.

In 1986 he was invited to exhibit at the XLII Venice Biennale.

In the course of 1987, he exhibited in Dallas five monumental marble sculptures were commissioned by the Bell Telephone Atlanta, then transferred to the Wheel Center of Los Angeles. At the same time launches an important collaboration with arch. Philip Johnson, creating a monumental sculpture in marble “Apollo and Daphne”, located in The Crescent Building in Dallas.

In 1989 he was invited to the XXXI edition of the Biennale of Milan, at the Palazzo della Permanente. Creates a sculptural group in marble for the new Palace of Congresses in Agrigento dell’ arch. Ryan scott of Palermo.

In the meantime, start an important collaboration with arch. Paolo Portoghesi, still continuing. For the same has already achieved, among other things, the four large sculptures located in the civic Center Cultural, Social Poggioreale Sicily, a large high-relief marble in the new chapel “Don Rizzo” the Mother Church of Alcamo and a marble sculpture of “Geometry” placed in the staircase of honour of the Palace Corrodi to Rome.

At the end of the Eighties, he develops a strong interest in the ductility of the terracotta, rediscovers the satisfying immediacy of the gesture.

Between 1991 and 1996 he produced portraits in marble of the governors of the Bank of Italy Paolo Baffi, placed in the home of via Nazionale and Guido Carli university, located in the workshop Papers and Values of Pier Luigi Nervi in Rome.

For the new stadio Nereo Rocco in Trieste performs an impressive marble sculpture depicting the “Nike”.

In 1991 the family Malnati commissioned a terracotta statue of St. Paul, situated in a chapel of the parish Church of San Martino di Malnate, in memory of his son Paul.

In 1994, the Municipality of Malnate has commissioned a large bronze bas-relief depicting St. Martin and the beggar placed on the bell tower.

In 1998, running the new coinage for the City of the Vatican. In the following year the official medal for the jubilee year 2000, and the coinage of the extraordinary Holy Year.

Also in 1999, he Paola the great bronze portal of the new Basilica of the Shrine of St. Francis of Paola, the patron saint of seafarers, and of Calabria, with the large statue of the Saint in marble, to which you add in 2001, a large high-relief in marble depicting “the Last Supper” for the choir of the same church.

In the same year he made for the Ministry of Public Works, the big six portraits in bronze, a tribute to the planners italiani del ‘900.

In the year 2002, the commission of the Bishop, realizing the marble of the new liturgical poles (the altar, the ambo and the venue) for the presbytery of the Cathedral of Terni, for which, in 2005, he is also the crucifix in silver, bronze and precious stones.

In 2005, performs the funeral monument of the bronze of the Archbishop Archbishop Oscar Romero, a symbol of the new martyrs of the Church, killed on 24 march 1980 in San Salvador. The tomb is located inside of the Cathedral of San Salvador. Also in 2005, produces the Cathedral of Terni, where in 2002 he had already performed the new presbytery in marble (the high altar, the ambo, and the venue), the Crucifix in silver, bronze and precious stones.

Since 2000, he has set up important to personal in the USA, Canada, Netherlands, italy and in Trieste, italy. That is much appreciated by Italian and foreign collectors, the sculpture is well situated in a dimension between tradition and modernity, attentive to the classical roots but at the same time carrier of new values and modern.

In 2008 began a major programme of work for the museum's “Cheon Jeong Gung Museum” in Korea, in the year of 2011 ranks in the same museum, an important group in patinated bronze, composed of 18 figures of large size.

In 2010, the Royal Castle of Racconigi, he participates in the fifth edition of the biennial exhibition of international sculpture sponsored by the Piedmont Region, and edited by Prof. Luciano Caramel, entitled “international Sculpture at Racconigi 2010 – Present and the experience of the past.”

In 2011, one of her sculpture in terracotta, dedicated to Galileo Galilei, is given to us by pope Benedict XVI at the prestigious Vatican Library of Sixtus V.

For the new church of Calcata, which was designed by architect Paolo Portoghesi, accomplished in the year 2013 the altar, the ambo and the two statues of the patron Saints St. Cornelius and St. Cyprian.

In 2015, he started work at the realization of the two imposing figures in marble of 350 cm of height for the new museum Cheon Jeong Gung in South Korea.

In march 2018 has the prestige of seeing opened his terracotta work entitled “At the end of Adolescence” at the famous and renowned fondazione Il Vittoriale degli Italiani in Gardone Riviera.

The 14 September 2018 and was inaugurated in Parma, a large portrait in bronze of the Pietro Barilla, founder of the famous multinational company, on the occasion of the 25th anniversary of his death.

In December 2018, he begins the study and the realization of the ambo in terracotta of the new Cathedral of Lamezia Terme designed by the architect. Paolo Portoghesi, which will be inaugurated at the end of march 2019; the same Cathedral, and realizes the bronze crucifix and two high reliefs in terracotta depicting the Madonna and Child with Saint Benedict.

2019
For the new Cathedral Lamezia Terme designed by the architect. Paolo Portoghesi realized in terracotta lectern, and two high reliefs respectively representing the Madonna with Child and St. Benedict; a bronze crucifix.

2017
The Risen christ – statue in bronze, representing the “Resurrection” placed in the centre of the apse of the parish church of Gurone – Malnate

2012- 2013
For the new church of Calcata designed by architect Paolo Portoghesi realized in terracotta of the pulpit.

2012
For the Abbey church, the cistercian St Bernard of Fontevivo (PR) produces stone Saltrio the altar, lectern and baptismal font.

2011
Located in the museum Cheon Jeong Gung Museum in South korea an important group of sculptures in bronze composed of 18 figures of large size.

2010
For the parish church of Gorla Maggiore (VA) creates a large crucifix in silver, bronze and precious stones.

2009
For the new the church of Calcata (VT) designed from the arch. P. Portoghesi realized in terracotta and the altar, a large statue of the Risen Christ and terracotta sculptures depicting the saints Cornelius and Cyprian

2007
Large marble sculpture to the The Logistics centre of Villa Spada the Guardia di Finanza, Rome

2006
The great Cross in silver, bronze and precious stones for the The cathedral of Terni

2005
Funerary monument, the tomb of the martyred Archbishop Archbishop Oscar Romero, bronze sculpture placed in the The cathedral of San Salvador, El Salvado Statue of the Blessed Father Spinelli, bronze, Institute of the Sisters Adorers of the blessed Sacrament, Cremona

2002
New presbytery in the marble altar, the ambo, the chair) of the The cathedral of Terni
The wind of Spring, bronze sculpture, swimming Pools, Mount White, Verona

2001
Six portraits in bronze. A tribute to the major planners of the Italian Twentieth century, Ministry of Public Works, Rome
The last supper, a large high-relief in marble for the presbytery of new The church of the Sanctuary of St. Francis of Paola, Paola, Cosenza

2000
The Immaculate conception, a statue in terracotta for the chapel outside of the city Centre “Cascina San Martino”, Noceto (PR), arch. Paolo Zermani

1999
Official medal for the Jubilee two thousand Coin extraordinary 2,000 Lire for the Holy Year.
Portal in bronze and marble of the new Basilica of St. Francis of Paola, Paola, Cosenza, arch. Sandro Benedetti

1998
The new coinage for the Vatican city

1991
Paolo Baffi, marble portrait of the former governor of the Bank of Italy, the seat of via Nazionale, Rome;
The high-relief in marble, statuario, The Mother Church, The Chapel Don Rizzo, Alcamo, Trapani;
Saint Paul, terracotta, natural size, the new chapel of St Paul, the parish Church of San Martino – Malnate

1984
Doors in embossed copper for the The Basilica of the holy Apostles St. Peter and Paul, Milan

1982
Monument to the emigrant. Ulysses, sculpture, bronze, steel, and granite, the Park, the First of May, Malnate- Varese

1967
Monument to the The Fallen, Fino Mornasco, Como

1965
Christ the King, monumental bronze (H. 6 mt.) that head on the facade of the The cathedral of Esmeralda, Ecuador