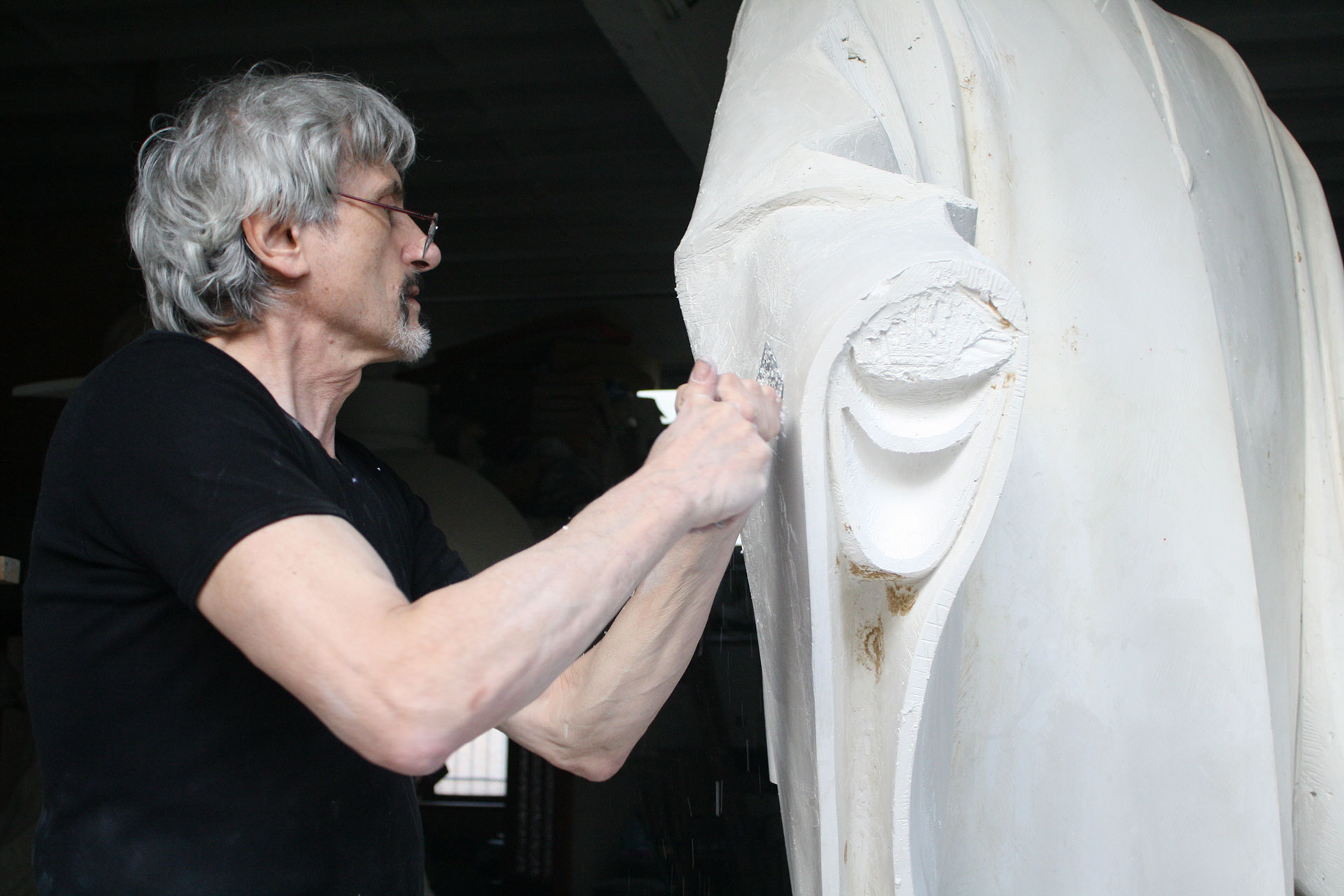 Paolo Borghi, sculptor: a meeting in the atelier

“The nature [...] is not to be with the same verdict would have when she makes them members acts as the motion in the bodies of animals, but puts you inside the soul, his body, the composer”
Leonardo da Vinci, anatomical Studies, f. 114v

You can look with other eyes, to make this contemporary sculptor, classical and anti-classical, his poetic, poignant, bearing in mind the uniqueness of the position taken by Paul Villages in the firmament contemporary art; eyes, which, finally, can escape the banality of life moderna, getting rid of all of that dullness matt who lives the high life to focus, rather, the eternal changing of the subject and of the forms which determines the same species beings of all his work, addressing their legendary metamorphosis the representations made by Leonardo da Vinci in the world, understood as a living being. With this contemporary sculptor, also thanks to a close confrontation with Paul the Portuguese who first detected the formal elegance and the inclination legendary which calls between nature, art and architecture – is opened and closed an era: the post-moderna. At the same time, it is in the presence of the myth. You can say openly Paolo Borghi and his work, that which constitutes its essence, a sculpture mitopoietica.

Beyond time and space the ordinary sculptures, the Villages are shrouded in an aura of magic and of itself is challenging because they live in a metaphysical dimension (in the sense heidegger) and, in fact, reveal a possible embodiment plastic. At the same time, manifest itself as a geological time riecheggiante, you could say, aside from the not chronicle: not a relief leonardo present in the Atlantic Code“I truovo [...] the mountains, the bones of the earth, with their wide base to penetrate and rise among the air, covered and clothes a lot of the other earth”. For this reason, the encounter with the works of the latest generation of this artist, it causes a two-fold problem: first of all a problem of perceptual, which implies a precise Gestalt, in the second place, a problem with the narrative that calls into question the dialectical relationship that has always governed the relationship between man and nature, personified by the singular forms metamorphic. Sharp look, I listen, I touch with a trembling hand the latest and current plastic form his date by two-three sculptures unexpected and moving, create Towns in the isolation of a pandemic and, behold, one of the sculptures seems to be whispering to me, “It's time to raise the anchor, / it is time to change the language, / it is time to turn off the lantern / on the door”, the verses of Marina Tsvetaeva. Verses composed after the tragic but inevitable return to Russia, or rather in the Soviet Union of stalin, again in exile in the fatherland, abandoned to their stems, and the announcement perdition. But the verses are addressed to the other works that precede it in the process, and from which this device takes farewell, moving away towards unexplored horizons. I come back to examine it more and more times this sculpture comparing it with the others that precede it and establish it, and to accompany it, sharing the challenge. I note, in the course of the last visit, that all the latest and current sculptures of Villages that have been transformed.

The a has revealed, as happens on the inside of st. George by Donatello, which occupies one of the kiosks outside of Orsanmichele in Florence, italy, a vitality, and an inner movement that attaches with an energy restrained and vibrant even the soul of the sculpture, giving visible form to the thought that precedes the action, the other is put to the dance after being stripped of the superfluous and having taken quite a formativity plastic heroic, while another still is made up of a power monumental and still, motionless like a mountain. All of them manifest an epic shiny. However, this is the epic is recited in a low voice, perhaps in order not to raise the matter. In any case, they seem to hold your breath while animate a spiral or a sine wave that follows the step, gesture, posture, or the gaze of the woman that is generated by ludo geometrico, which governs the sculptural mass of the polyhedron and all, now, this appears as a hint of a suspension of magic. The work that spoke ends to launch a piercing scream without sound. Another work he whispers, voice hoarse and mixed of the earth melting verses that, on the moment, not I take. With the latter created by Paolo Borghi me the urge to make new explorations, force me to another see. Here I am intent to explore the slopes, the valleys, the curves of the harmonic and moved their volume, the surfaces and edges of these polyhedra extraordinary. The eye loses itself in these forms, harmonious addressing – we tied up some more in the Russian world just now re – Mussorgsky, arm in arm, Igor’ Stravinskij, but also to Satie, since Paris is always lurking around the corner. While the last sculpture in the making, and it is also talking about the bottom, reads with Anna Akhmatova, “which ruins I speak, and from that abyss cry? ...”. I go back to fix this and the other devices of the new generation of Paolo Borghi, up to being dazzled. There is no doubt the gap made by the artist, who transformed his own propensity mitopoietica, a tendency of which is to recite from his created from the fragments of the pre-socratics, from Empedocles to Parmenides, from Anaximander to any other.

Now reads as an oracle, a sculpture of dancing, one of these last works of Villages, with the unmistakable voice of Akhmatova, to warn: “... hear my voice, / always still give you a listen. I returned a final time in the atelier of Paul Villages, with these images in the eyes, with the memory of this versificare in the heart, with the mind, the flavors, the colors, the harmonious movements of the desire of a I; I returned to observe these latest devices of Paul, his sculptures of the latest generation from morning to evening, with the intention of gathering as yet I had not been able to grasp. Now, some of the lands were incorporated in the plaster and changed the skin, literally, have changed the volumes and measures, taking an intimate vitality, a new force, a vibration, that first did not possess. Other – one or two – are still in production, and so on two different occasions I was able to attend to the work of Paul, and finally, in ripresentarmi by him, in his studio, I surprised him again committed to change imperceptibly a curve upward, to slide like a rhapsody (Ghershwin?) a profile descendant riecheggiante, in fact, new horizons of figures and other inferences music. The artist intervenes to remove and put on, indifferently, slowing down the action, allowing for pauses for reflection, risking variants imperceptible for the purpose of perfecting the sprezzature, acceleration, breaks, the full and empty elements of a volume.

On a second device, I was able to follow in live the sculptor while he was engaged in changing thicknesses, weights, and measures of shape. In another sculpture still, while I look at them, my interlocutor gives rise to changes in the plastic now of this and now of that detail the figurative. Finally, he manages to transform the form into itself until it comes to life, a life of its own – one and only – that manifest a soul collection by subject. It makes no sense, I found, to recover against these organisms sculptural me in the face, possible and impossible claims now to this and now to that author – not to names, Marino, Moore, Hepworth, Manzù, but also Canova, and many others – while instead it has meaning and value to try to identify the underlying reason for these forms that recall even the exciting artistic works of man tolkien set in paleostoria – thus suggesting an appeal to an essay by Carlo L. Ragghianti – but you already turned to the future. What is more important, at the end, is that I have found that in the devices of the Paolo Borghi, the human and the divine, the nature and geometry, musical harmonies and plastics, dance, whatever, are to constitute the entity in which, say Parmenides, that which appears, is theBe.

Here, then, is that this latest revelation gives a specific status to the sculptures of Paul Villages: they wrote for me, in 1982, Ragghianti, are, like any work of art, “living beings” to share with the world.

Table gratulatoria & bibliographic note
The accumulated debts are many, I will, however, thank Paolo Borghi, the sculptor, and his daughter Irene. As well as some of the authors of which do, in random order, essential bibliographical references: Orlando Figes, The dance of Natasa. The history of Russian culture (XVIII-XX century), Einaudi, Turin, 2008; Carlo L. Ragghianti, The man conscious. Art and knowledge in the paleostoria, Calderini, Bologna, 1981; C. L. Ragghianti, Art of living being (from the diary critical 1982), Pananti, Florence, 1984; Ernst H. Gombrich, the Old masters, new readings. Studies on the art of the renaissance, Einaudi, Torino, 1987; Cesare S. Maffioli, the path of The water (1500-1700). Appropriation of the arts and the transformation of mathematical, Olschki, Firenze 2010; Hannah Arendt, The life of the mind, ed. en. by Alessandro Dal Lago, il Mulino, Bologna, 1987; Bruno Reichlin, From the “elegant solution” to the “open building”. Written around some of the works of Le Corbusier, by Annalisa Viati Navone, Mendrisio Academy Press, Silvana editoriale, Mendrisio-Cinisello Balsamo, 2013; Karl R. Popper, The world of Parmenides. The discovery of the philosophy presocratica, edited by Arne F. Petersen with Jorgen Mejer, ed. en. edited and with a Foreword by Fabio Minazzi, Piemme, Casale Monferrato, 1998; Joseph Rykwert, The column of dancing. On order in architecture (1996), Scheiwiller-24Ore, Milano, 2010; Paolo Portoghesi, Nature and architecture, Skira, Milan, 1999; Fritjof Capra, The soul of Leonardo. A genius in search of the secret of life, Rizzoli, Milan, 2021; Evandro Agazzi, The objectivity of scientific and its contexts, Bompiani, Milano, 2018; Martin Heidegger, what is metaphysics?, by Franco Volpi, Adelphi, Milano 2001.